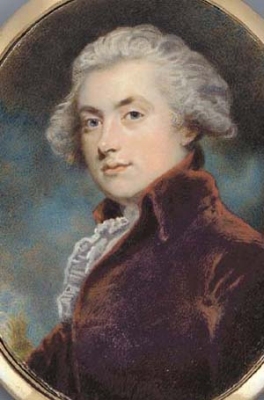 William Spencer, 1790 2
William Robert Spencer was born on 9 January 1769 at Althorp, Northampton, Northamptonshire, EnglandG.3 He was the son of Lord Charles Spencer and Hon. Mary Beauclerk.1 He married Susan Gräfin von Jenison-Walworth, daughter of Francis Graf von Jenison-Walworth and Charlotte Smith, on 13 December 1791.1 He was also reported to have been married on 17 June 1791.3 He died on 23 October 1834 at age 65 at Paris, FranceG.4,3,5 He was buried on 13 November 1834 at Chapel, Harrow School, Harrow on the Hill, London, EnglandG.5
He was educated at Harrow School, Harrow, London, EnglandG. He was educated at Christ Church, Oxford University, Oxford, Oxfordshire, EnglandG. The following obituary was published in The Gentleman’s Magazine in January 1835:

W. R. SPENCER, ESQ.
Oct. 23. At Paris, aged 65, William Robert Spencer, esq., cousin-german to the Duke of Marlborough.
This accomplished gentleman was the second son of the late Lord Charles Spencer, by the Hon. Mary Beauclerk, daughter of Lord Vere, and sister to Aubrey fifth Duke of St. Alban’s.
The younger son of a younger son, Mr. Spencer, early in life, found it prudent to accept the appointment of Commissioner of Stamps. The office disqualified him for sitting in Parliament. Mr. Spencer was a poet of much sweetness. His poetical works were a Translation of Leonora, from the German of Burger, a folio volume, embellished with designs by his aunt, Lady Diana Beauclerk, 1796. Urania, or the Illuminé, a comedy; the Prologue by Lord John Townshend, 1802. The Year of Sorrow, 1804, 4to. A volume of Poems, 1811. Mr. Spencer was one of the most highly gifted and accomplished men of the age in which he lived, though a love of contemplation rather than of action, a natural, a constitutional indolence, governed him with irresistible sway, and forbade those exertions which might have ranked him among the great poets of his day, or have placed him in a situation where his extensive knowledge and numerous attainments would have rendered him useful to his country, either in a diplomatic or legislative capacity. As a diplomatist, his qualifications were of a very superior kind. To an intimate acquaintance with the politics of the different courts of Europe, he added, what indeed enabled him to acquire this information, a thorough mastery of the French, Italian, and German languages, which he spoke with a fluency and grace that excited the admiration of all the well-educated foreigners with whom he was in constant intercourse.
Like some to whom nature has been liberal in bestowing genius, but parsimonious in the more useful gifts of activity and steadiness of pursuit, Mr. Spencer shone with extraordinary brilliancy in conversation. His knowledge was extensive, his memory retentive, and his wit ready, refined, and sparkling; but this was so invariably under the control of a benevolent disposition, of pure good nature, that he was never known to exercise it in a manner to give even momentary pain.
Though he never became the colleague of statesmen, he was sought as their companion; and at his house in Curzon-street, the two great political opponents, Mr. Pitt and Mr. Fox, met at least once as upon neutral ground, and enjoyed the charms of literary conversation and polished wit, unleavened by party feeling or a struggle for superiority. Among those, too, with whom he lived on terms of intimacy, were the Prince of Wales, Sheridan, Dr. Lawrence, Sydney Smith, Horner, and others of deservedly high reputation.
During the last ten years Mr. Spencer resided in Paris, where he died; not missed, perhaps—because the state of his health had long condemned him to utter seclusion—but lamented by all who had known him, from whose memories the charms of his conversation and his social qualities can never be effaced.
Mr. Spencer married, Dec. 13, 1791, the Countess Susan, daughter of Francis Count Jenison-Walworth, (of the Holy Roman Empire) and widow of Count Spreti; and by that lady, who survives him, he had issue, five sons and two daughters:
1. Louisa-Georgiana ; 2. Charles, who died an infant in 1793 ; 3. The Rev. Aubrey George Spencer, Archdeacon of Bermuda, who married in 1822 Eliza, daughter of John Musson, esq. and has issue; 4. William Spencer, esq. who married in 1820 Frances, daughter of John Garland, esq. and has issue; 5. Harriet-Caroline-Octavia, married in 1819 to her cousin-german Count Charles Westerholt, Chamberlain to the King of Bavaria; 6. the Rev. George John Trevor Spencer, Rector of Leaden Roding, in Essex, and Perpetual Curate of Buxton, in Derbyshire, who married in 1823 Harriet-Theodore, 4th daughter of the late Sir Benjamin Hobhouse, Bart. and has issue; and 7. Frederick-William.
__

Susan Churchill’s biographer, Dorothy Howell-Thomas, has the following reflection on William Robert Spencer, who was the grandfather of her subject:

A man in public so irresistibly amusing that for years his anecdotes and mimicry were remembered, was with his own family morose and silent. He was clever, an excellent linguist, and a sensitive user of his own language; but all that he is now remembered by is a collection of light society verse and an opera or two; while some of his serious and 'moving poetry does not deserve to have been so well forgotten . He had, without doubt, an innate charm and friendliness, but he was weak, and, with an unhappy marriage and heavy debts, became increasingly addicted to brandy and laudanum. He had the intelligence and articulateness, as well as the rank, to have made his mark in politics; yet as the years went by he was despised and written of with contempt —'never solid, never steady'.4,6