Children of Toofaiti (?) and Edward Young

M, #158042, b. 16 July 1797, d. 5 May 1891
Last Edited=24 Dec 2005
John Buffett was born on 16 July 1797 at Hull, Bristol, Gloucestershire, EnglandG.1 He married Dorothy Young, daughter of Edward Young and Mauatua (?), on 10 February 1824 at Pitcairn IslandG.1 He died on 5 May 1891 at age 93 at Norfolk IslandG.1
He was a schoolteacher and carpenter.1
On 10 December 1823 On 10 December 1823 an English whaler, the Cyrus', visited Pitcairn. John Adams, beginning to feel the infirmities of his age, asked the Captain if there was anyone on board ship who would be willing to stay and help him with the arduous task of teaching the many young people. Captain Hall kindly passed his request to his crew. John Buffett, a young man of 26, stepped forward and volunteered his services. Being bound by no family or home ties, he counted it 'no great sacrifice to remain'. Buffett had, in early youth, been apprenticed to a cabinet maker in Bristol. Of a roving nature, the sea held a strong fascination for him, and he left his earlier profession to sign on aboard a small Newfoundland trader, served in the American merchant marine, went to London in 1821 to board the Penelope, and later the 'Impregnable'. He had been shipwrecked in the Gulf of St. Lawrence, and later cast away on the coast of California. There, he was treated very kindly by an old Spanish commandante, who made every effort to convince him to stay. But Buffett made his way to Honolulu, where he signed on the Cyrus. It was only on Pitcairn that the wanderer had a vision of a congenial occupation and a peaceful home.
He wrote many Pitcairn memoirs after the death of Adams (who had full editing rights of everything written while he was living), and is considered a reliable source.
From 1823-1828, when George Hunn Nobbs arrived, the young schoolteacher, with his practical, easy-going approach to living, took an increasingly powerful role in the leadership of the island. As Adams declined in health, he was also looked to as the de-facto religious leader.
The period from 1829-1832 seems to have witnessed a growing division between followers of the impudent and increasingly devout Nobbs and the practical, strongwilled Buffett. When Nobbs formed an 'alternate' school that attracted many of his pupils, Buffett quit teaching in disgust.
The arrival of Joshua Hill in 1832 marked the beginning of a very trying period in the lives of Buffett, Evans, and Nobbs. Realizing that these three would be the most threatening to his plans and beliefs, Hill singled them out for special humiliation and punishment.
Of the three, strong-willed Buffett was considered the most imminent threat. Hill, hearing of an incident that occurred 5 or 6 years before wherein Buffett had committed some wrong against the people of Pitcairn, obliged Buffett to undergo severe punishment, as he describes in his own words, 'After Mr. Hill's beating me over the head, breaking it in two places, and likewise my finger, I was suspended by my hands in the church, and flogged until I was not able to walk home. I was from this treatment confined to my bed for two weeks, and it was several weeks before I was able to work, or to use my hand.'
The ill-treatment that the three endured reached a climax when they were forced to leave the island in March of 1834, on board the Tuscan. They were carried to Tahiti, where Buffet became mate of a trading vessel. He was later reunited with his family, but they were not able to return to Pitcairn until after Hill's forced departure in 1837.
After Hill's departure, Buffett seems to have returned to teaching, and also to imparting his woodworking skills to his students, leaving the pastoral duties to Nobbs, and a cautious truce prevailed between the two. In fact, Buffett's introduction of woodworking to the curriculum brought several former pupils, disinterested in abstract education, who became very interested in learning more manual skills.
From early 1848, Buffett left the island on a voyage of 'commercial enterprise', perhaps to find a market for the higher and higher quality of carving and woodcraft produced by his students. He spent most of the period in Hawaii, and if he was successful, history does not relate. He returned on 10 Jul 1849 to much rejoicing.
In April of 1856, Buffett went to Norfolk with the rest of the population. He returned, however in July of 1872, he decided to return to Norfolk as a Minister to the people there 'who needed him'.
Buffett emerges from the records as a curiously appealing personality, a man whose desire for virtue exceeded his ability. Despite his faults, he was extremely popular with his fellow Pitcairners due to his lack of aggressiveness, his good nature, and his willingness to share with everyone the woodworking skills that were eventually to become the basis for Pitcairn's chief industry.1 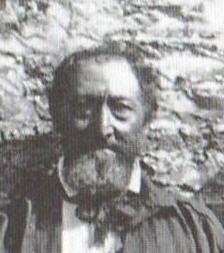 George Adams 2
George Adams was born on 6 June 1804 at Pitcairn IslandG.1 He was the son of John Adams and Teio (?)1 He married, firstly, Polly Young, daughter of Edward Young and Toofaiti (?), on 1 April 1827 at Pitcairn IslandG.3 He married, secondly, Sarah Quintal, daughter of Matthew Quintal and Tevarua (?), on 6 October 1844 at Pitcairn IslandG.4 He died on 29 October 1873 at age 69 at Norfolk IslandG.1
He held the office of Chief Magistrate of Pitcairn Island in 1848.5 George was a strong opponent of Joshua Hill. In 1856, because one of his grandchildren was very ill and suffering convulsions, he opposed taking her on the migration to Norfolk, as it would kill her. His initial response was to simply refuse to go, but was forced to go by the island leadership.1