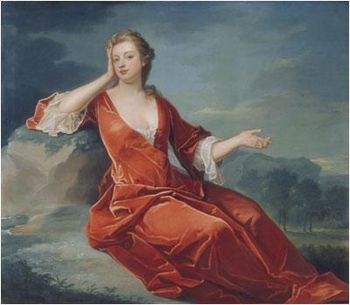 Sarah Jenyns was born on 5 June 1660 at Holwell House, Hertfordshire, EnglandG.3 She was the daughter of Richard Jenyns and Frances Thornhurst.4,5 She was baptised on 17 June 1660 at St. Albans Abbey, St. Albans, Hertfordshire, EnglandG.3 She married John Churchill, 1st Duke of Marlborough, son of Sir Winston Churchill and Elizabeth Drake, on 1 October 1678.6 She died on 18 October 1744 at age 84 at Marlborough House, London, EnglandG, leaving a fortune of £3,000,000.3 She was buried at Chapel, Blenheim Palace, Woodstock, Oxfordshire, EnglandG.7 Her will (dated 11 to 15 Aug 1744) was proven (by probate) in 1744, bequeathing to her first woman, Mrs. Grace Ridley, two portraits of the Duke and one of herself, to the Duchess of Leeds a watercolour portrait of the Duke, and to the Duchess of Montagu a snuff box with two portraits of the Duke and another covered with a large diamond. She left £500 apiece to a Mr. Richard Glover and Mr. David Mallet, to write an account of the Duke's life from his available papers—which was never written.
She was also known as Sarah Jennings.8 From 1 October 1678, her married name became Churchill. She and Anne Stuart, Queen of Great Britain were associated between 1683 and 1708.9 After her marriage, Sarah Jenyns was styled as Duchess of Marlborough on 14 December 1702.4 She held the office of Keeper of the Privy Purse before 1711.3 She held the office of Mistress of the Robes before 1711.3 She held the office of Groom of the Stole before 1711.3 She wrote the book Conduct From Her First Coming to Court to the Year 1710, published 1742.3
Gibbs quotes a Miss Strickland, "One of her principal charms was a prodigious abundance of fine fair hair."6 She expressed in her will that if her son John or his son were to accept any office or employment under the Crown (other than the Rangerships of Windsor Great and Little Parks), either of them so doing would forfeit all interest in her estate as if he were actually dead. Her estates included the manor of Wimbledon and the mansion at Wimbledon Park which she had recently built.10 She has an extensive biographical entry in the Dictionary of National Biography.11