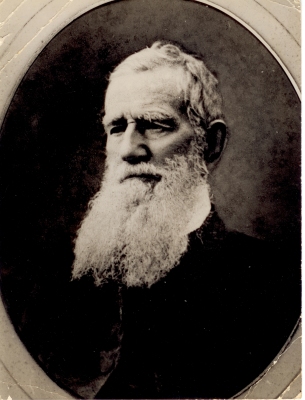 Reverend George Hunn Nobbs 2
Reverend George Hunn Nobbs was born illegitimately on 16 October 1799 at Moira, IrelandG.1 He was the son of Francis Rawdon-Hastings, 1st Marquess of Hastings and Jemima ffrench.3 He married Sarah Christian, daughter of Charles Christian and Sully (?), on 18 October 1829 at Pitcairn IslandG.4 He died on 5 November 1884 at age 85 at Norfolk IslandG.1
He emigrated to Pitcairn IslandG arriving on 5 November 1828.5 He was a clergyman.4
Unacknowledged son of Francis Rawdon, Marquis of Hastings, and Jemima French, daughter of an Irish baronet, who, becoming involved in the Irish revolution, was forced to leave his country. On his mother's deathbed, she extracted from George a solemn promise never to accept any favor at the hands of his father's family. Moreover, she was very anxious that he leave England and take up residence in some other part of the world where 'her wrongs and mine might be buried in oblivion'.
His mother and grandmother, suffering a serious reduction in circumstances, sent him to Yarmouth into the care of an elderly family named Nobbs, whose name they forced him to assume. She had arranged with Admiral Murray, commanding in North Yarmouth, to put him aboard a Royal Navy ship, and in 1812, he was placed aboard the Roebuck, then to other ships.
After his service to the Royal Navy, which led him to Valparaiso, he appears to have embarked on a career as a soldier of fortune, serving in both the Argentinian and Chilean navies. In 1822, he was serving on a Neapolitan vessel, and the next year found him in Sierra Leone, where he was commanding a ship named the Gambia. By 1826, he was in Calcutta. His adventures were harrowing, according to his own narrative, and he apparently survived shipwreck, capture by the enemy, and the deaths of many of his shipmates. He described his early life as 'filled with enough incidents to enliven three Hentys and four Rider Haggards' (adventure writers of his day).
On 5 Nov 1828, Nobbs arrived on Pitcairn, at age 28, accompanied by a mysterious American shipmate, 'Captain' Noah Bunker. They came from Calloa in an 18 ton cutter after a six-week voyage. Nobbs was never very explicit about the circumstances, but it appears that Nobbs entered into an agreement with Bunker wherein Nobbs would supply the money with which to outfit Bunker's boat, and they agreed to make the 3500 mile trip to Pitcairn together. Later investigation seems to indicate that the title to the cutter was more than a little in question!
Although not popular with the islanders immediately after his arrival, he seems to have impressed them with an advanced level of devoutness. His religiosity, according to his critics, seems to have had little precedent in his life before his arrival! Further, his increasing religious leadership was undermining the power of Buffett, the schoolteacher. When, upon Adams death in 1829, Nobbs established a separate school, Buffett quit teaching in disgust.
The period from 1829-1832 seems to have witnessed a growing division between followers of the impudent and increasingly devout Nobbs and the practical, strongwilled Buffett. The arrival of Joshua Hill in 1832 marked the beginning of a very trying period in the lives of Nobbs, Buffett, and Evans. Realizing that these three would be the most threatening to his plans and beliefs, Hill singled them out for special humiliation and punishment. The 'quiet,devout' Pastor Nobbs was not considered by the bombastic preacher, Hill, to be a serious challenge, and he soon replaced him as Pastor.
The ill-treatment that the three endured reached a climax when they were forced to leave the island in March of 1834, on board the Tuscan. They were carried to Tahiti, where Nobbs appears to have travelled on to Mangareva to serve there as a missionary. He was later reunited with his family, and they later ended up in the Gambier Islands with Evans and his family. They were not able to return to Pitcairn until after Hill's forced departure in 1837.
Ironically, it was pressure by his 'quiet, devout' rival that forced the English government to remove Hill. Nobbs returned as Pastor, fully consolidating his position vis-a-vis Buffett, who concentrated on his teaching and woodworking until his later call to religious leadership on Norfolk.
He was the first islander to be formally trained in the ministry. He sailed to England with Moresby in 1852, to attend seminary. Within two months, he had qualified for ordination as deacon and priest, and was commissioned by the Bishop of London as 'Chaplain of Pitcairn Island'.
After being entertained my many notables, he was received by Queen Victoria and Prince Albert. Loaded down with portraits of the Royal Family and a per annum of 50 pounds from the Society for the Propagation of the Gospel, he returned to Pitcairn in triumph in 1853.4

M, #155649, b. 19 September 1830, d. 2 March 1855
Last Edited=16 Apr 2006
Consanguinity Index=0.0%
Reuben Elias Nobbs was born on 19 September 1830 at Pitcairn IslandG.1 He was the son of Reverend George Hunn Nobbs and Sarah Christian.1 He died on 2 March 1855 at age 24 at Pitcairn IslandG.1
In 1847 he survived a serious injury, although he was from that point lame in one leg. He, in company with several others, went goat hunting. He fell, and his gun discharged into his right hip. After long months wherein little improvement took place, a surgeon from a passing ship
extracted much wadding which had been embedded in the wound. After that, recovery was rapid, but his lameness prevented his participating in the work of the island.2 In 1849 he traveled to Valparaiso, Chile where he took employment as a clerk. His health declined, and he became very ill with consumption, so he returned to his homeland. Kind hands carried him from the landing to his home when he returned, for he was universally beloved.2